Day before surgery – Lisa and I doing a ‘selfie’. I love this picture!

Our third day in Chonburi, Thailand started like the previous ones, get up, wash, dress and then meet the other transwomen for breakfast on the first floor of the hotel at 9 am.  Breakfast usually takes an hour as we sit and chat.  Then promptly at 10 am everyone goes back to their rooms.  Later I would find out that the clinic staff starts their rounds at 10 am and everyone needs to be in their room then.  But that would not effect me until after I came back from the hospital.  I was told to be waiting at the front lobby at noon for the clinic van for my ride to the hospital.  So we went up to our room to select and pack the few things we would need.  I brought a dress (and wore another one), my get well cards, computer and tablet to have something to do and some of my astronomy magazines to read.  Not much for a week in the hospital!  Before we knew it, they called up from the lobby – again our room clock was wrong but was close enough that we were ready and were almost out the door anyway.

I remembered the first trip in the van to the hospital and how the woman in the back seat was on her way in for the surgery and how she was feeling – nervous but excited.  I was the same, a feeling of finally, let’s do this.  As we waited in the hospital lobby, an older Thai man and his wife started to chat with us – but they didn’t know any English and of course we didn’t know any Thai.  It was interesting and a bit uncomfortable as he kept staring at me, probably figured out I was transgender.  They were polite, but I couldn’t wait to get up to our room. 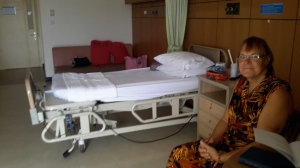 Just got into my room, night before surgery. Waiting for the 2nd bed and soft mattresses.

I had a private room with two beds and a nice view of the bay off of the ocean.  Lisa stayed in the bed next to me the entire time which was quite a comfort.  Being a nurse, she could communicate with the other nurses and the doctors to make sure everything was right, plus she was able to help and to direct my care, given her experience.  At times it sounded like yet another foreign language as they spoke to each other in medical’ese!  I was really impressed with the nursing staff and doctors and the way they treated Lisa as one of them.

Great Thai food – although due to the language difference we sometimes were surprised by what actually showed up.  But that was good too – never disappointed – although surprised.  Also some american food they prepared was, well, the best way of saying this is that is was ‘their’ interpretation of what it was supposed to be.  It was still good. 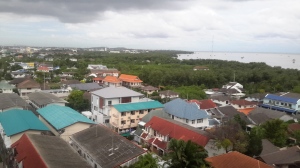 View out our window. The bay (tide is in) on the right. This is mud during low tide!

I was admitted at noon the day before the operation.  After settling in, getting a special mattress top for the bed (the beds were solid as rock …), we ordered something to eat as the nurses brought all the other ‘stuff’ that I would need afterwards and went through it all with me (dilators, pads, medicines – quite a large amount of stuff).  The anesthesiologist came in and had a long talk with Lisa about what I could and could not take (I have a reaction to ibprofin).

Then a psychologist came in to interview me (making sure I really was a transsexual).  I had to draw two pictures, one of me, the other of some scene, with trees, etc.  The first picture I drew of myself, longer hair, wearing a dress and giving an astronomy talk.  The second picture I drew of a cabin in the woods, on a lake, a porch going out over the sand beach and Lisa and I in inner tubes close to shore.  He asked about each picture, getting details of why I chose what I did.  He seemed impressed by them …

And finally Dr. Suporn and the staff member that would be looking out for me came in.   Later that night, after enjoying a particularly good Thai supper – the enema nurse came in …. oh girl.  I supposed since I had already enjoyed that meal – what difference did it make ….. Trying to make it to the bathroom that final time was um ‘interesting’ and challenging to say the least. 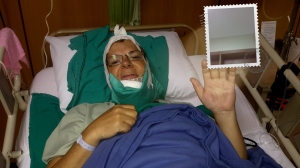 The next day went soooo fast it’s hard to remember what happened.  I do know they came in early – like 6am or so.  First was a nurse that shaved me down there.  I don’t remember much about that, just that it happened.  Then a bit later they came in and inserted an intravenous tube in my veins.  At 9 am they came to get me.  They wheeled my bed down the hall, into the elevator and down to the operating room.  Boy, watching the ‘ceiling’ move, Lisa by my side, nurses by the other side, was a strange feeling.  Lisa was by my side all the way into the operating room suite, holding my hand tightly and smiling.  I remember holding Lisa’s hand, lots of people in blue and the anesthesiologist (she was very sweet and comforting) talking to me – and then ……. nothing (someone ‘slipped a mickey’ into the intravenous I when I wasn’t watching ….). In the states, they would always say “count backwards from 10” but here, things just went blank.

This next part is from Lisa – as I have no memories of.  Lisa got back to the room at about 9:15am and waited there for me.  I and my bed were wheeled back into our room at 3:20 in the afternoon.   Lisa says that as soon as I saw her, my face just beamed – totally glowing she says.  She said I just kept looking at her, I couldn’t keep my eyes off her! I would fall asleep for a bit, then wake up, hold Lisa’s hand and we would talk for a bit before I would fall back asleep.

My first recollection of conscientiousness was back in my room, in my bed, with Lisa giving me a kiss to wake me up!  My new bottom was fully bandaged with a stent packing inside me.  I had three tubes coming out: urethrae, drain from under the packing and a catheter with a drip bag with a side tube for a morphine drip.  Right away, the first feelings I had were of a very deep body sensation of being ‘right’.  I had a deep visceral feeling of being back to the way I used to be – even though of course, I was never physically female – but that is the feeling.  As things progressed and I was able to register feelings from down there, I was surprised and astonished that these new feelings were oddly very familiar – same way as the visceral feeling of being back to were I was.  Both of these experiences deeply affirmed who and what I am.

That evening, a staff member came and slept on the couch and watched over me the entire night.  It was so reassuring to have her there.  I would look over to Lisa sleeping on one side and the nurse sleeping on the other:  I was surrounded by care and love.  It made that night very relaxing.  I was in no pain what so ever.

On day 4 Dr. Suporn came back and removed the bandages/covering.  Then on day 6 he came back to remove the stent packing inside.  Holy cow – it was like watching a magic show where they pull a scarf out of a hat or something and it just keeps coming and coming and coming …..  There was a lot of stuff in there!  I thought “exactly how big am I” — geeesh.   Now I was allowed to getup out of bed and finally had my first shower – boy that felt good (although I was not allowed to move without a nurse present).

Day 7 was release day – they pinched off the catheter, I had to drink lots of water, then they removed it and I had to prove I could urinate before they would allow me to leave.  This was difficult, but I was finally able to do so by standing in the shower – which is good cuz I could take a shower and when I dried off, the wheelchair was there ready to take me to the waiting van and off Lisa and I went, back to the hotel.

The only ‘pain’ I experienced the entire time in the hospital was a sore butt as I had to stay in the bed for 5 days without getting up.  I remember having 3 tubes in me and having to be very careful when turning side to side.  Thank goodness all three tubes were on the left side – not a problem.  Then on day 4 they moved the catheter to the right side —– that was just not fair …..!!!!  Moving was a tad more complicated then.  I would do small exercises in bed, like lift my bottom up, move my legs and arms around, etc. just to try to prevent them from getting sore laying there.  That did seems to help.  They had the infamous morphine button by my bed too.  I only used that once the entire time, and then it was not because I was in pain, but because I started to feel something down there more and more and thinking it might turn into pain decided to head it off at the pass kind of thing…  Who knows if I really needed to do that.

The next post will cover dilation – something I’ll need to do for the rest of my life.