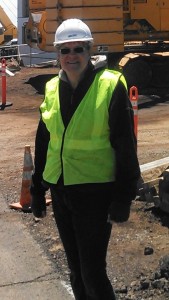 The ‘big’ 6!  This is the second milestone of recovery from SRS (4 months, 6 months and 1 year).  At 4 months the contractions and nerve re-connections pretty much stopped.  Now at 6 months most of the rest of the constant pain has gone away.  Whereas before it felt like something very hard was just inside under everything – that has now gone away.  Before, there was a constant low level pain – every second.  Regardless of what I was or was not doing – I always felt “down there” – constantly.  Only when I took pain medicine was it normal – with out pain or a constant swollen feeling.

Now, it’s just occasionally that there is any pain down there.  Today I didn’t even use my seat cushion at work – and I worked at the summit (it’s harder when working up there).  I’ve graduated to only using my seat cushion if it’s a hard chair.  Trust me – that is a lot of progress!  I can also sleep at night without having a pillow between my legs to keep them apart.

I’ve gained about 8 pounds since the operation.  Now that I’m feeling better, I’m going to start my walking again.  I bought a weighted hula-hoop for exercise too.  And oh boy – it’s not so easy to lose weight like it was before.  My goal is to drop another 30 lbs over the next year.

It’s been very cold here in Hawaii, especially upcountry here.  It’s been down in the 50’s.  Now, back when I lived in Minnesota, with furnaces in every house, even at -40 below zero, our house was a nice comfortable 72.  But we do not have heaters here.  So when it’s 50 degrees outside, it’s ever so slightly warmer inside – like 52 ….  That is cold even for Minnesota for inside.  And worse:  since my operation it’s very easy for me to get a chill.  I feel like I’m freezing almost all the time.  Life has changed.

I have three wonderful women that I’m privileged to have had as mentors as I transitioned to full womanhood.  Lisa of course and two others that I work with at the observatory.  One of them now, no longer works there.  She is the only one that would wear a dress or a skirt to work.  Almost everyone else is in t-shirts and jeans.  She was my inspiration for many things, style was one of them.  She is also the person that ran interference for me when I first started using the women’s restroom.  The other woman at work has also been an inspiration and huge help.  I would best describe her as a ‘wild woman’ in the best way – the way we all should aspire too.  Lisa on the other hand is my conservative mentor – right down the middle of the other two.  She keeps my feet on the ground and everything ‘real’.  I’m fortunate to have these three woman around me and mentoring me.

I still see the woman, that left the observatory, for lunch now and then, and just gave her and her sister’s family a tour of our observatory.  They had two sons, 5 and 9 I believe.  The older son was asking lots of very good questions – I wish everyone that I gave tours to would ask these kinds of questions!  But the younger child was getting bored fast.  He raised his hand and when I asked what his question was, he stated:  “I raised my hand three times …”  Oh dear ….

The spring is a busy time for me as I’m preparing and getting ready for some astronomy outreach events.  I am giving a demonstration on how we find NEOs (near earth objects – asteroids that are close to the earth’s orbit) using a 3D virtual model of our observatory.  The first is for the University of Hawaii’s open house in Manoa (Oahu) and then on the big island for their AstroDays celebration.  Later I teach about 320 3rd graders some elementary astronomy.  So I’ve been busy polishing up my presentations.  I enjoy these!

Soon we will be going back to Brookings to look for houses or lots again.  More houses and lots will be coming back on the market with the coming of spring.  Lisa is diligently watching and saving those we are interested in.  I can’t wait to get back there.  That is a magical place – just like Maui is.  Like other times in my life, it seems when it’s time to move on, I get behind it and put my energy into it.  It’s not that I want to leave, it’s just that I know I must.  I am going to miss Maui greatly.  I have spent two decades traveling the globe, have lived in a number of places – none I would actually call home, any more than home was where-ever I was.  Maui was the first and only place that actually was a home to me – and always will be.  This is the only place where the land beneath my feet has a deep connection to my spirit.  I chose my surname to honor this:  literally “the home”.  This is hard, but I embrace this move to Brookings and am investing my future there.

Not sure if I’ll couple a trip back to Minnesota with the next Brookings trip or the one after.  But I can not wait to go back and see my two sons, their wives and the four grandsons I have now.  And also to see many of my friends and some old friends that have stayed with me.  Somehow, now, this is very important to me, this re-connection.  I think a lot of this has to do with feeling that, for them, I’m now on the other side of transition.  The last time I saw them was when I came out to them at the very beginning of all of this.  I know so much more now and am so different from back then (it’s been awhile).  I wish I could go back to that time with the knowledge I have now.  Now, few will ask, most will quietly attempt to accept and carry on.  I wish I would have the opportunity for a full and deep discussion with them – but I truly doubt that a situation would arise to allow it.  Advice for others:  make it good the first time ….

For the first time I’m seeing scientific and medical papers being published about older transsexuals and the uniqueness of our stories, especially my story.  Today, children 4 or 5 years old express their gender truth and because there is enough information out there, parents, schools and society acknowledges them and they never have to live their lives coping with disphoira (it’s getting there – there are still a lot of horror stories).  For those older but not my generation, there was enough information, usually hidden, but enough that they knew they were the opposite gender even though they did not know the terms for it or if anyone else was like them or anything else about it.  They usually fought it – they became ultra-masculine: top navy seal, football quarterback for a top 10 team, even getting married and having children – as a way to prove to themselves they were what society said they were – men.

But older than that – me for example – there just wasn’t such a thing – nothing and society back then was very strict and fierce.  The only option, at least the way I explained it to myself, was that I was different – I was a boy, but I had all these other abilities (which were all feminine – but these all got twisted into somehow being masculine and acceptable).  But it really comes down to what we are inside and when that is in direct conflict with society (everything external to us, family, school, friends, relations, etc.) and this conflict is dangerous – then our subconsciousness deploys protection mechanisms.

When I was very young, I had a number of incidents that wound up driving this deep underground.  I was also a fast learner and when I saw others in deep trouble, this reinforced my protections.  Since there was no way to know or understand what my conflict was all about – part of me simply hid and made up a story – a story that would take 60 more years to unravel (see my beginnings blog for more information).  It’s nice to see these research papers basically stating the same – at last.

A number of people (family, spouse, older friends) have mentioned that they never saw this coming.  Along the lines of “I just don’t see how you could have hidden this for all these years – I did not see any indications of this in you”.  Well, nether did I !!  That is a consequence of how we create these protections within ourselves.  Ask anyone who has had childhood trauma, for example repeated familial rape.  They might even see the perpetrators as benevolent as they have to in order to survive.  These protections last a life time and only when things are ‘safe’ and these protections are no longer needed, will cracks start to appear and slowly layers upon layers peal back to reveal what actually happened – and we slowly heal.  It took seven years with a therapist and a ‘safe’ environment with Lisa to be able to bring all this out and start to understand.  And as I’ve stated before:  “As I allowed myself to become more of a woman, I started to notice something. It was more like my maleness was falling away then a femaleness was being attained. I was not becoming more of a woman, rather, like layers of an onion, my maleness was being peeled back.  I realized, I’m not becoming a woman – I am a woman.”

It is also of interest that both my ex-wife and my spouse now, have said that what initially attracted them to me were these female ‘sensitivities’ in a male.  They both see that it was the woman that I was underneath that was the attraction:  “you are not like other men….”.  Of course neither see themselves as anything other than heterosexual and would not have even giving me the time of day if I was a woman when we first met.  And of course when we first met – I still thought I was a man – only with all these ‘extras’.

These two things have always been difficult for me to explain:  why I didn’t have a clearer picture of myself as a girl at an early age and why no one, including myself, understood this or could even see my transsexualness for most of my life.  Only in hindsight is all of this clear to me.  I hope this post helps to answer this for you.  I’m glad to see research covering this as well.